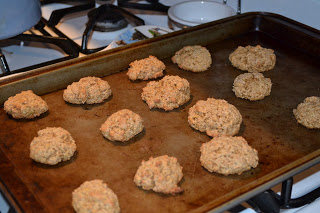 Yesterday Rebecca said she wanted to bake. And since we had been looking at her new Strawberry Shortcake coloring book she told me she wanted to make strawberry cookies and vanilla cookies. When she got up from her nap the first thing on her agenda was to make the cookies. I quickly started searching for strawberry cookie recipes. Then she said she just wanted vanilla. So I did a quick search for “vanilla cookies” with nothing really in mind. This is the first recipe I came across. It had no comments, no pictures, nothing. But it sounded very easy and quick. And that’s what we needed. I had no idea if these would turn out at all. There isn’t even any fat (butter/oil) added to the cookies. But I figured I’m an experienced baker and might be able to make it work. So I decided to just go for it.

I have to say this is the fastest cookie I’ve ever made. And Rebecca could help with all of it. I only made a half recipe since I thought it might be a flop. After mixing the dough there was not nearly enough moisture (as I expected with only 1 egg as the liquid). So I debated about what to add and decided to add a little milk. That gave a soft dough. I dropped them onto the cookie sheet and went for it. They’re not bad. Very mildly sweet. A soft cookie. Rebecca seemed to really like them. It would actually be a good cookie for a young child/toddler because it’s not too sweet or crispy. And it uses all good ingredients. A half batch made about 15 cookies. I think if I make them again (which is likely on those days where Rebecca decides she wants to bake all of a sudden…and this recipe doesn’t require any softened butter, special ingredients, planning ahead) I might try adding cinnamon. Or some kind of chips (chocolate or butterscotch).

I’ll post the recipe the way I made it…using whole wheat flour and adding milk. I also adjusted the sugar since my brown sugar is like one big block. So I had to use regular cane sugar. Overall a decent cookie. Great recipe for baking with young kids. And Rebecca got her “vanilla cookies.” 🙂  She seemed very satisfied with what we came up with. 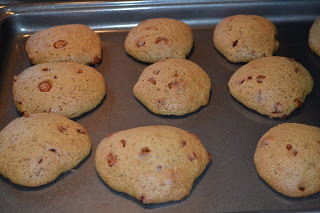 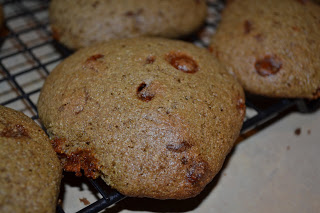 **Edited 9/4/11 – I made a batch of cinnamon vanilla cookies yesterday. They turned out great! I added cinnamon to the dough. And mixed in cinnamon chips. The cinnamon really improves the taste of these cookies. I bet they would be really good with a little cinnamon glaze. Then they would be triple cinnamon cookies. Maybe we’ll try that next time. I made a double batch this time and made the cookies a little bigger. I got 20 good sized cookies. I’ll update the recipe. 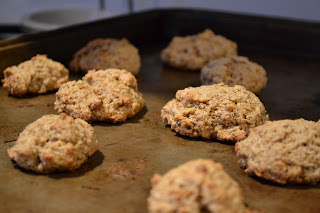 Mix all ingredients (except chips) in one bowl (I just mixed it with a wooden spoon). Stir in cinnamon chips. Drop by spoonfuls onto ungreased cookie sheet and bake at 425 degrees for 8-10 minutes (I did 8 min.).