I’ll admit it…I sweat…a lot 😛  I’m not a big person…and I’m cold all the time. BUT I also have severe anxiety. And right now I’m pregnant. Not a great combo 😛  I haven’t used regular deodorant in a long time. I’ve been using a couple different natural deodorants for well over a year. They work fine most of the time. But when I’m really nervous. And especially right now they just don’t seem to be all that effective. I’d rather be sweaty than go back to conventional chemical deodorants. But I’d still like to have something that works. I finally got around to making my own deodorant last week. And tried it out yesterday. I’ve only used it for one day. But the verdict so far is very positive! Even with a big outing yesterday, that would normally cause me to sweat a bunch, I stayed dry. And there was no sweat odor. Pretty amazing for me. I still have to test the limits of this stuff, but so far I’m loving it. And I love that I know exactly what’s in it. Sometimes even the “natural” deodorants make me nervous. So this is great.

I got the recipe from Donielle at Naturally Knocked Up. I don’t have any old deodorant tubes to use. So for now I just put it in a small container and apply it with my finger. No big deal. It goes on very easily. No mess, no residue, nothing on my clothes. And it smells good too. I used peppermint oil since that’s all I have. Maybe I’ll have to try tea tree oil sometime. I only made a half recipe to try it out. It’ll still last a while. So glad I finally tried this. I just wish I had done it sooner! So easy. And hopefully very effective. And Donielle even mentioned that she sweats less/needs less after using it for a while. I hope that’s the case for me too. Not much of a picture…but it’s deodorant. You can’t expect much 😛 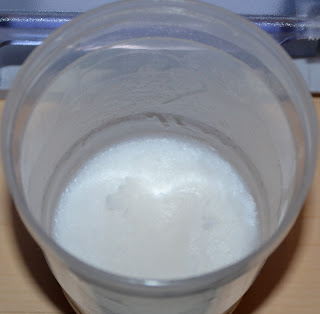 Mix all ingredients together and press into an old deodorant container. To use, let it rest against your skin for a couple seconds to soften the coconut oil, do one slow swipe under each arm and use the palm of your hand to spread it around.