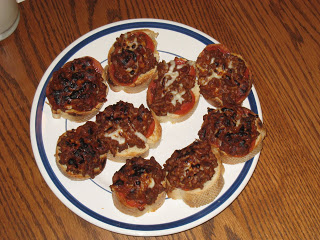 Last night was another Voogt family favorite – pizza burgers. Not really sure why they are called burgers. It’s a recipe from Justin’s mom, something he grew up eating. There are two recipes, but I kind of combined them into one last night to use the ingredients I had on hand. I’ll post both recipes.

Hamburger Pizza Burgers
1 lb. hamburger
1 can tomato soup
1/4 tsp. oregano
1/2 tsp. garlic powder
1/2 cup mozzarella cheese
1 loaf french bread, sliced
Brown hamburger. Drain. Add rest of ingredients except cheese. Heat until bubbling. Add cheese. Put spoonful on each slice of french bread. Broil 3-5 min.
Pepperoni Pizza Burgers
1 lb. hamburger
spaghetti sauce (or pizza sauce)
oregano
pepperoni
mozzarella cheese
1 loaf french bread, sliced
Brown hamburger. Drain. Top each slice of bread with spaghetti sauce. Sprinkle with oregano. Lay pepperoni on each slice. Put hamburger on top. Top with mozzarella cheese. Broil 2-3 min.
Last night I made the burger/tomato soup/cheese mixture and put that on french bread in addition to pepperoni. I only made a half recipe (1/2 loaf of bread…a/b 9 burgers). There are a few left over for another meal for Justin this week. And there is enough casserole for another meal. So my plans have changed a bit. Mostly just odds and ends or salad for me. I’ll still do chili tomorrow.