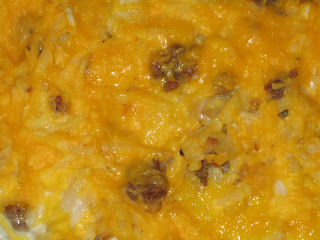 Justin has been talking about egg casserole with hashbrowns lately. So I found a simple recipe on All Recipes and tried it last night. He really liked it. I didn’t have any…I don’t care for sausage or hashbrowns that much. It was super simple to make, though. And could be prepped ahead. So it’s going in my recipe file:) I did a half recipe and put it in an 8″ square pan. It would probably be good with some sauted onion mixed in. And I might cut down slightly on the hashbrowns next time. Seemed like there were a lot of potatoes compared to egg and meat. Maybe it’s just me, though. I like an egg casserole to be more “eggy” than this was.

**I made this again (1/2 recipe) and used 6 eggs and a little less hashbrown. Worked very well. But it probably needs and extra 10 min. in the oven.