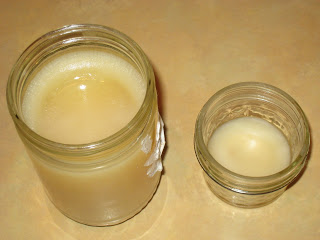 Yesterday I finally attempted to render the lard we got from our co-op a while back. I did a fair amount of research before trying. Some methods just sounded like way too much work (cutting it all up, cooking it for days, etc.). I found a link for a crockpot method that sounded much easier. So that’s what I did. Yesterday morning I stuck the lard in the crockpot (it was still mostly frozen…you don’t have to have it thawed completely), turned it on low and let it go. I did end up putting the crockpot in the garage because it has a very strong smell. And it’s definitely not one I enjoy right now (too bad it doesn’t smell like bacon cooking :P). I let it cook for 24 hours total. There was still some left, but I decided I was done with it. I was ready to totally air out the house 😛  Plus I might need my crockpot for chicken stock later today. I still got quite a bit of lard even without cooking the whole thing. I poured it through a cheesecloth into a jar just to be sure there weren’t any bits of junk. Then I let it cool and stuck it in the refrigerator. So far it seems to have worked. It looks right, I think. I’m anxious to try cooking with it! I guess that will be the real test. This lasts for a long time in the refrigerator. 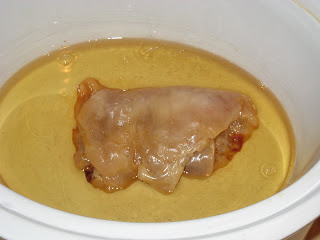 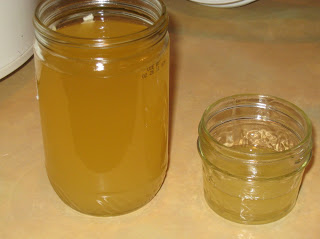 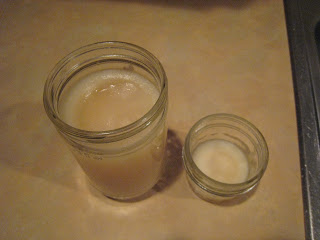 2. Turn crockpot to low.
(2a. Put crockpot in the garage.)
3. Let cook until lard is cooked down enough to your liking (it will turn to liquid).
4. Pour lard liquid into a clean jar (you may strain it at this point).
5. Let cool.
6. Refrigerate.
7. Use in place of butter or oil for cooking/frying/baking.