Another new grain free muffin attempt today. I found this recipe on Cooking GAPS. I modified it slightly – used coconut oil instead of ghee and did the egg yolk/white trick so I could eliminate the baking soda. They turned out well, but fairly crumbly. I think that’s because I used some of my homemade almond-pecan flour…which is quite coarse. And the quantity of apple made them not hold together as well. I’ll have to experiment a little to get them just right. Or maybe add an extra egg next time. The dough was very thick. But overall a great recipe. Very good flavor. Next time I’ll use muffin liners, too. That will help keep the muffins together. I’ll post the recipe the way I made it. This made 11 muffins. 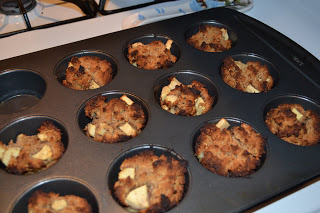