I read and re-read parts of the GAPS book all the time. I catch things I missed before. I refresh my memory. But one thing that stood out the very first time I read it was the part that talked about GAPS children having eating/chewing/texture issues. And immediately I thought of my daughter.

Although she’s always been a good eater, we have struggled since she first started solids with her chewing. She would (and still does sometimes) gag on simple things like scrambled eggs and squash.

Even as recently as a few weeks ago she puked up a mouthful of yogurt that she swallowed because I had mixed in a little pearsauce and she said it had “strings” and “chunks” in it. She has always had major issues with the texture of her food. And it is not uncommon for her to hold food in her mouth (in her cheek) for a long time…like holding a grape or a piece of meat in her cheek for 30+ minutes. Or even holding a wad of mushy chewed up food in her mouth for 5 minutes without swallowing it.

We have to tell her over and over to chew or swallow. It makes meal times very tough. I don’t want eating to be a battle. But sometimes I just can’t get her to chew/swallow her food and it gets very frustrating. She can spend an hour eating literally 3 bites of food…meaning she has food in her mouth the entire time but only manages to finish 3 bites.

I assumed she was just picky. But I think there is more to it than that. I know she got a messed up gut from me. Which could be the cause. Here are a few snippets of what the GAPS book says about GAPS children. 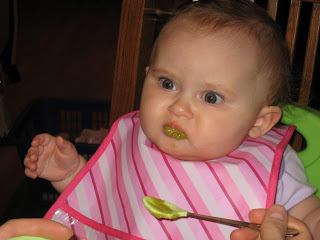 “Some cannot chew properly and hold food in their mouth for a long time or try to swallow it in a lump.”

“[There] is a distorted sensory input. The taste buds in their mouth receive the information about food, which gets passed to the brain. A GAPS brain is clogged with toxicity and cannot process this information properly. As a result, to these people the food can taste completely different to what it should taste like. The taste, texture and feeling of food can be quite offensive to them.”

“[There] is a craving for sweet starchy foods that is typical of all people with abnormal gut flora. No matter how finicky…most of them would accept sugary drinks, biscuits, cakes, sweets,…white bread.”

“A human mouth is home for a large population of microbes which normally protect the mouth…GAPS children often have a very abnormal bacterial flora in their mouths…The activity of this abnormal flora produces a lot of toxins, which are stored in the mucous membranes of the mouth and alter the functioning of the taste buds, saliva glands and other structures. This also causes a chronic inflammation in the mucous membranes, making it a target for the immune system. As a result many GAPS patients have bad breath, very red lips and mouth, various spots and ulcers on the cheeks and a coated furry tongue. Many foods like raw fruit and vegetables, herbs, uncooked nuts and seeds, cold pressed oils and other foods have strong detoxifying substances, which bind to the toxins in the mouth trying to remove them. This can feel far from nice, ranging from stinging, itching and burning to simply an unpleasant taste. And these are often the foods GAPS patients will not accept.”

“In some cases [there is] an inability of the toxic brain to orchestrate normal movements of the muscles in the mouth, tongue and other structures involved in chewing and swallowing. Foods have to be very soft for [these patients] and they very often vomit.” 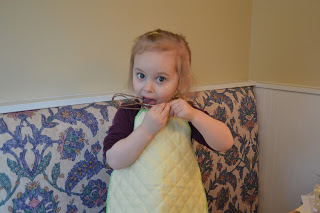 Turns out that the foods I think are so easy to eat/chew may actually taste very odd/funny to her. No wonder she can eat starchy foods without problems (very frustrating for it to take her 30 minutes to eat one grape but have her scarf down a pile of pretzels in a minute).

It may also be why she has always needed to drink so much milk when she eats. She drinks with almost every bite of food she takes…even before she has finished chewing/swallowing half of the time. It’s like she just can’t do it without milk. Even with liquidy things like yogurt or ice cream. She still guzzles milk after every bite. I’m not sure if it’s because the food tastes bad or there is a funny feeling in her mouth or what. And she does not like any amount of spice in her food. She likes salt, but that’s about it.

I’m happy to say that we have made some progress in her food choices/aversions. I have been trying to make a point of getting broth in her diet more regularly and cutting back on grains. Now she is starting to request butter on veggies and bread (she wouldn’t eat things with it before).

She will happily drink a cup of broth with her meal (she LOVES brothy soup). Thankfully she has always liked broth. She especially likes it in a cup with a fun straw 🙂  She now likes pea soup (before she would gag on one tiny bite…literally puke it up) and will eat a whole bowl. She has tried a couple varieties of squash recently and said she liked them. Surprisingly she liked spaghetti squash the best (this is the girl who doesn’t like strings :P). She only eats a few bites of it, but still huge progress from crying about having to try it and practically puking it up.

We’re still working on eggs. She will eat some forms now. She couldn’t eat raw/hard foods for a long time becaise she just would not/could not chew them and would either almost choke on them or just hold them in her mouth. Now she loves raw peppers, nuts, grapes, apples, etc. 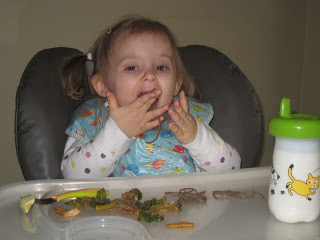 We are starting a cow share soon, and I am hoping that using raw milk instead of pasteurized milk will make a big difference for her.

Stay tuned for a future post on what the GAPS book suggests to do about a fussy eater.