Every so often Justin points out a recipe in our local newspaper. I usually glance at it and comment on how junky it is or that I have no need for more recipes to set on my counter and forget about. 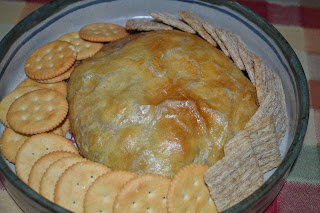 Last week he saw a recipe for brie en croute. Basically brie cheese in puff pastry. Normally I wouldn’t make it. But we were having a guest over last night. So I decided to make it for our appetizer.

I can’t say it was the healthiest appetizer…I used store bought puff pastry…which has HFCS and soy lecithin.

But the rest of it was quality food (homemade jam, crispy nuts, organic dried cranberries). And it tasted really good 🙂

If your body can handle a little bit of “not so real” food once in a while give this a try! Even my kids liked it. 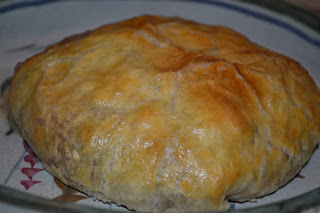 It is a great appetizer for a holiday gathering.

I could only find an 8 oz. package of brie, so I made a slightly smaller version than the original recipe. I’ll post it the way I made it. 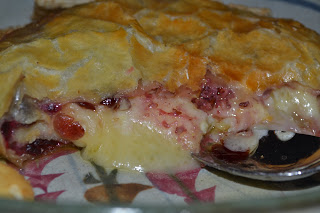 Mix egg and water. Set aside.

Unfold pastry sheet on lightly floured surface. Roll into a 12 inch square. Cut off corners to make a circle.

Spread preserves to within 1 inch of the pastry edge. Sprinkle cranberries and nuts over preserves.

Top with cheese (I’ve never used brie cheese before…I think you can eat the white stuff on the outside…but I cut it off :).

Bake 20 minutes or until golden. Let stand one hour before serving.

Serve with crackers and vegetables.

*I sprinkled my pastry scraps with cinnamon and sugar and baked them at the same time.