This week we made “cheese chicken nuggets.” It’s a chicken nugget (her favorite) filled with cheese. I made them using two methods. They both worked fine. I cut up some chicken chunks. Then I pounded some of them thin and rolled them up with cheese inside. Some I just cut a slit in the side and stuffed with a chunk of cheese. Then I breaded them all and baked them. They tasted great! I was pretty rushed when making dinner, so I didn’t do them as neatly as I would have liked and didn’t get in as much cheese as I would have liked. But they were still great. I’ll make them again for sure! I served them with homemade honey mustard. 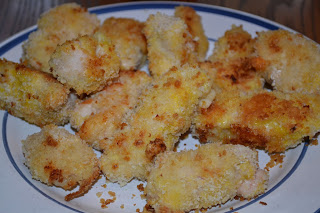 2 large chicken breasts
cheese, cut into strips or chinks or shredded (I used parmesan in some and white cheddar in others)

Coat in flour, then beaten egg, then seasoned panko or homemade bread crumbs.

Fry in a cast iron skillet in coconut oil/palm shortening/lard until crispy on all sides.