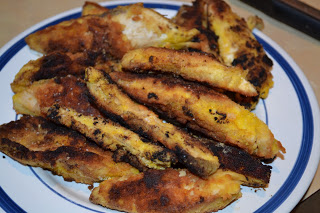 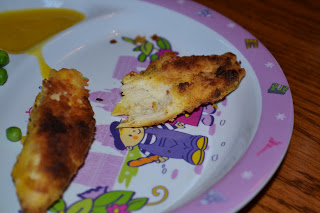 On Sunday I roasted a chicken. I love having all the leftover meat to use in other meals. I had planned to make chicken nuggets this week. I usually use boneless skinless chicken breasts for that. Cut them, bread them, fry them. But when I deboned my chicken this week I had very limited time so most of the meat was still in large chunks. Then I thought, wouldn’t it be easier to use that to make my chicken nuggets? So I tried it last night…AWESOME!! Best chicken nuggets I’ve ever made I think. The meat is already cooked, so you just have to fry it until you have a nice crust. So quick and easy…and much less messy…no raw chicken to deal with. I broke the meat into the size of strips/nuggets I thought looked right. Then I dipped them in egg, rolled them in coconut flour and pan fried them in a combo of lard and palm shortening. Delicious!! I served them with homemade honey mustard. It reminded me of eating chicken strips at Fudruckers when I was younger…the flavor anyway…this meat was far superior 🙂  Rebecca absolutely loved them as well. I don’t know that I’ve seen her eat/chew her food that quickly in a long time 🙂  I can’t wait to have leftovers for lunch today. Dip them in honey mustard with extra egg yolk mixed in…tons of nutrition. I think I know what I’ll be making with leftover roasted chicken in the future 🙂  You could even make a huge batch and freeze them for even easier meals on busy nights. Just warm and serve. 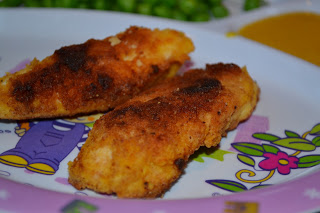 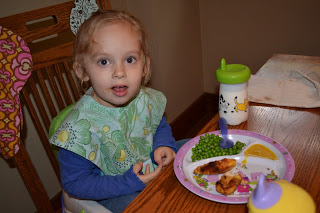 Break chicken into strips/chunks. Coat chicken in egg. Then in flour/salt mixture. Fry in hot grease/oil in cast iron skillet, a few minutes on each side until golden and crispy. Serve with honey mustard or fermented ketchup.