After making raw yogurt I decided to try a cooked version. At first it looks hard. It seems like there are a lot of steps. But in reality it’s very easy. You’re basically doing 4 things – heat the milk, let it cool a little, add the culture and let it sit. So it’s really not much more work than making raw yogurt. You just have to heat it and let it cool a little first. I followed my SIL’s directions at Today’s Menu Take It Or Leave It. Very easy to follow. 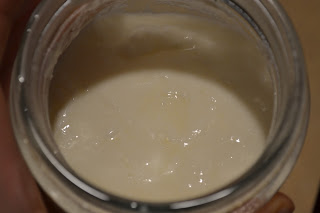 And the outcome…great! This produced a very smooth, creamy, flavorful yogurt. I made some vanilla yogurt with it for Justin this morning. He thought it tasted great. I’m sure Rebecca will like it too. This will definitely be my go-to method for making yogurt. I still want to play around a little with how long I let it culture. This batch was very mild…not much of the tang of normal plain yogurt. But that’s not a bad thing.

I’m so glad I FINALLY got around to making my own yogurt (I’ve been wanting to for about a year now…don’t know why I never did). There are several reasons I’m glad to be making this now. First…it’s healthy! Lots of healthy bacteria. Second…it will save a lot of money! That’s a big one. I buy yogurt every week. It’s one of the biggest expenses. I hate spending so much for so little. This will be a huge money saver…especially since we’ve got all this great raw milk to use up anyway. Third, it will save me trips to the store 🙂  I don’t have to worry about running out of yogurt. If we’re getting low I can just make more. This will really help me with my goal of only going to the grocery store every other week instead of every week. Finally, you can make any flavor you want 🙂  If I want to buy organic full fat yogurt at the store I can get plain, vanilla, strawberry or chocolate. That’s it. Now I can make whatever flavors we want. I made vanilla this morning. But we can make any kind of fruit flavor, peanut butter, chocolate, apple cinnamon, whatever. And I don’t have to worry about feeding my family unhealthy sugar. I can use honey or maple syrup to sweeten it…and I’m sure less of it than the boughten variety.

Now that we have this great yogurt I am so anxious for me to be able to eat it!! Yogurt is one of the foods I miss the most from going dairy free. I used to eat it daily. Hopefully in a week or two I can add it back in. That will be a happy day 🙂

If you have never made your own yogurt I encourage you to try it! It really is very easy. It does not require much hands on time at all. And if you get it going in the morning you can have some ready by the afternoon. I thought it was easy the first time I made it. So I’m sure it will be even easier now that I know how. Even if you don’t have raw milk, you can make your own yogurt. It will still be healthy and much cheaper.

I didn’t take step-by-step photos like my SIL did. If you want a really detailed description check out her blog. Here’s the slightly condensed version of her recipe. 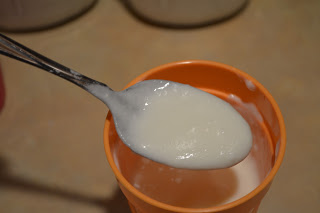 milk (preferably raw, but pasteurized willwork…NOT ultra-pasteurized)
yogurt starter (I used some plain, boughten yogurt for my first batch and I’ll use my homemade yogurt from now on)

quart sized jars with lids
large stockpot with lid
water for boiling
a dish rag
a thermometer, either candy or meat will work
a large cooler or incubator
a large towel

Put your dish rag in the bottom of your stockpot. This helps stabilize the jar(s). Then pour milk into your quart sized jars. Make sure you leave about an inch or so of room from the top of the jar. Place the jar in the pot and fill the stockpot with water at least half-way up side of jar. You’ll want to bring this to a boil. I place my thermometer in the water so that it sterilizes.

Once your water is boiling, turn the heat down a little, to around medium to medium-high… enough to maintain a good simmer. Move your thermometer to a jar of milk… having it in the water till boiling sterilized it. You’ll want to keep it going until it reaches 180-185 degrees (this only took a few minutes for me once the water was boiling). 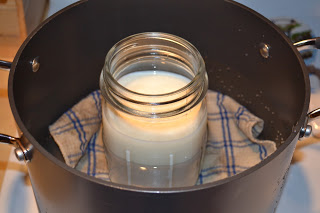 Now you wait for your milk to come down to between 90 – 120 degrees. I’ve found that between 100 – 105 is optimal for me… this makes a nice, thick, creamy yogurt. This takes about an hour and a half. You can either check the temperature with your thermometer once you think it could be reaching the proper temperature. Or you can just feel the outside of the jar. Remember that our body temperature is 98.6 degrees, so you want it to be slightly warmer than your hands. If its too hot to hold, its not there yet. I checked the temperature with the thermometer the first time I made yogurt, but haven’t checked it since. I just go by feeling the heat on the outside of the jar.

Once your milk is at the proper incubation temperature, you will need to stir in about 2 Tablespoons of yogurt starter into each quart of milk. Be sure to stir gently, as you are stirring in living organisms and don’t want to jostle them too much.

The longer it sits, the more tart it will get. I’ve incubated my yogurt for anywhere from 6 hours to 14 hours. I found that at 6 hours, it wasn’t quite thick enough for my liking. 8 hours seemed to produce a good, thick, creamy yogurt with a hint of sweetness. I didn’t notice much change in thickness by increasing the time, just a more tart taste. I try to only let mine go 8-10 hours normally (I did 8 hours…it was good!)

Once your incubation time is up, transfer your jar(s) to the freezer for about an hour. Don’t open them before you do, just put them right in there. After that time is up, transfer them to the refrigerator. You’ll get a true sense of the consistency of the yogurt at this point. Don’t be alarmed if there is some whey on top of the yogurt, this is totally normal. Just stir it into the yogurt.

———————-
That is a lot of wording for a simple process. Here is the shortened version:

You can mix in anything you like to flavor your homemade yogurt. To add extra nutrition stir in egg yolks and coconut oil. Here are some ideas: